TRUSTED FOR OVER 40 YEARS 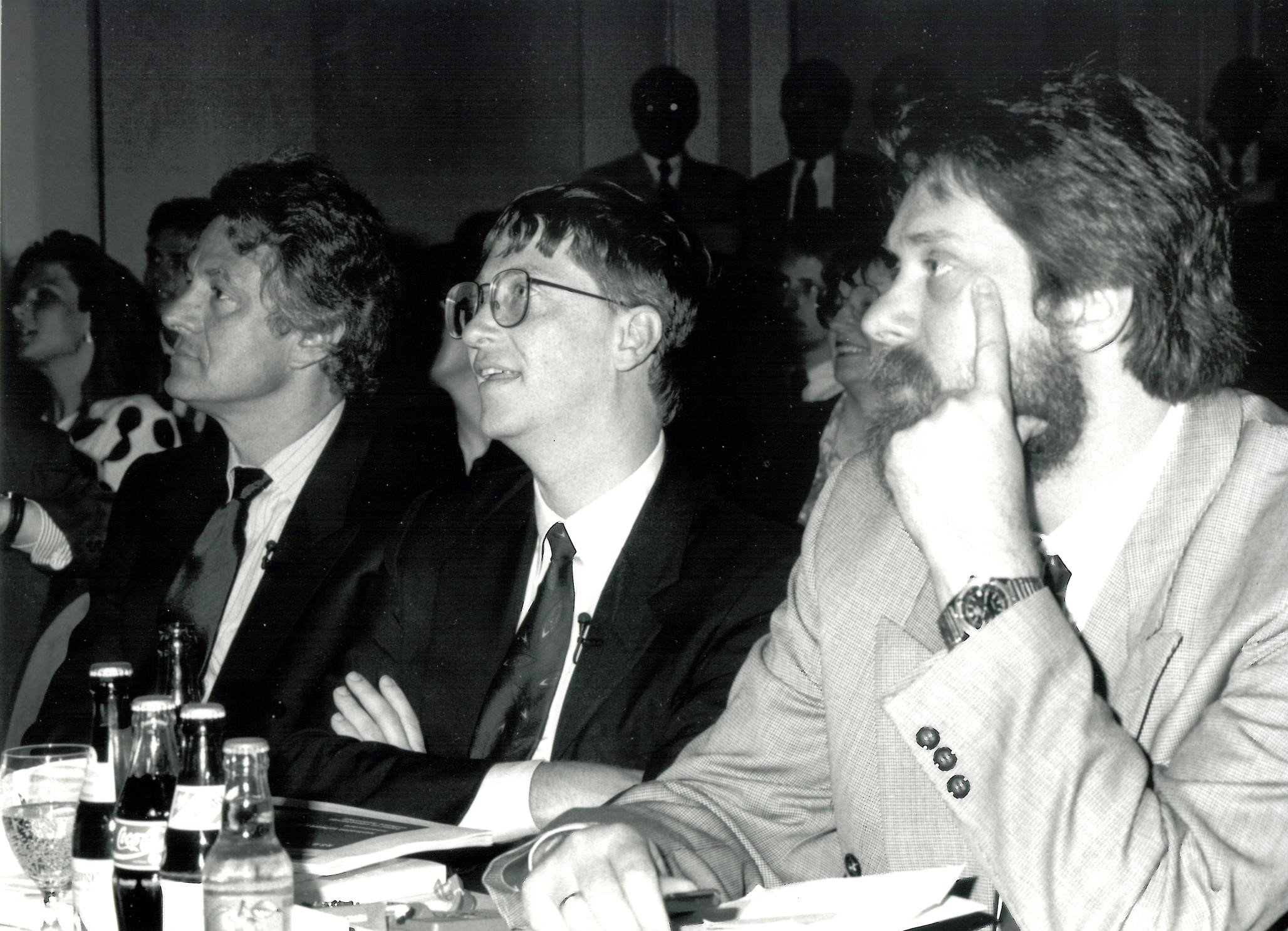 A Salute to Bill Gates at 65

A month ago in October, Bill Gates turned 65 years old. In recognition of his birthday, countless articles were written about his career at Microsoft and his and Melinda’s tireless work building the Bill and Melinda Gates Foundation. It is probably fair to say that no one has ever contributed more as an agent of change (outside the political arena) while lately becoming the target for brainless attacks by conspiracy theorists and political pundits.

I first met Bill in Spring 1989 when he visited the largest computer fair in the world: CEBIT. Microsoft traditionally had a moderate trade show booth compared with the multi-story booths of the big computer makers like Siemens or Nixdorf at that time. The corporate sales team had invited the most important IT managers that we worked with for meetings with Bill and the German Microsoft management team to discuss new products and technical advances. In early 1989, we were just moving slowly into the Windows world but sold predominantly the original DOS-based Microsoft Word and Multiplan.

“Bill was (and still is) an incredible leader who inspired the troops by vision, knowledge, thought leadership … Bill is certainly not done at 65 and the world is considerably better off thanks to his many contributions to technology and society as a whole.”

In the late afternoon my boss, who was head of large account sales, took me aside and told me that the meeting with Daimler-Benz was running late and he could not take Bill to the airport. The honor would be mine. “Thomas, take Bill to the helipad, fly with him to the Hannover airport and make sure he gets his flight home to Seattle!” He handed me Bill’s suitcase, a plastic bag and introduced me to the young Bill Gates. Bill was a year (and still is) older than me, but he looked 10 years younger and far from the Chief Executive of the new, almost famous software company that I had joined six months prior.

My career had taken an unexpected turn in October 1988, when I was hired as a sales representative for large accounts at Microsoft GmbH, the German subsidiary based in Munich, much to the surprise of all my colleagues at the Free University of Berlin where I was teaching International Politics and International Organizations. Having studied Political Science as a passion, my dream job was to become a professional staffer for the United Nations. However, jobs like that were rare and hard to get, because the German quota at the United Nations was too high. Luckily, my department asked me to stay on as lecturer and later Assistant Professor with a special tasks to build up the “Center for International Services”, one of the four focus study areas of which all students had to choose one for specialization.

In the second year of my studies, I collaborated with one of my professors to launch a new publishing company focused on study books, political and economic topics. We created typoscripts which meant using a common typewriter for the manuscripts, photographing the pages and using that for printing the books, a very common exercise for low print-runs. Real typesetting was much too expensive. After a while, I was introduced to the first PCs and I started to have the manuscript written with Microsoft Word. The next step was using the first laser printers to produce great looking manuscripts to be printed.

One fateful evening when I scoured the newspapers for my next job (I had a five year contract with about one more year to go), I saw an ad from Microsoft looking for a sales rep for their large account sales division. My life was diverted to a very different destination.

On the Hannover fairground there was a heliport for quick access to the airport. During CEBIT, the road to and from the CEBIT grounds were so clogged in the morning and evening that a 10 minute ride with a helicopter was the only way to make it. Needless to say, I had never ridden in a helicopter but this was the job at hand. “Follow me please,” I said to Bill and led the way. The quiet, shy and already famous Bill Gates followed me to the helipad, where we boarded a very small helicopter. It was extremely small and Bill was pressed in between another guest and me. “Do you have my luggage,” Bill suddenly asked and I realized I never made sure it was loaded onto the helicopter. Luckily it was and we lifted off bouncing up and down in the air.

Hannover has two terminals connected with a walkway. Once we arrived at Terminal A, I frantically looked around with a 360-spin to find the departure gate to Copenhagen, the next stop for Bill enroute to Seattle, but I could not find it. “Perhaps in the other terminal?” Bill asked quietly. I gave him a look like, “What would you know” but only said: “Please wait for me, don’t move.” Two minutes later, I returned and said ruefully to him: “Never doubt your Chairman!” and Bill gave me his famous grin, and somehow we connected.

After we checked in and had 1.5 hours to wait his departure, I asked Bill, if he wanted some food and we decided to go to the next restaurant. Sitting together chatting I realized that I was the newbie in the company, and he was the big boss from Seattle. Nevertheless, we chatted about all kind of topics including existential issues. Bill asked me how I felt after six months at Microsoft and I honestly told him that it was a bit boring. I told him about my publishing days and then said that looking at sales reports at Microsoft was not very satisfying. He, on the other hand, had a much better job, because he could plan, create and see his product afterwards gaining all the satisfaction needed for life. We were so deep in discussions that I nearly forgot about his departure and we ran to the gate which was already closed but I was able to attract the attention of an attendant who would let him through to board his flight.

Afterward, I realized that I had just spend 90 minutes with the CEO and Chairman of my company where I was an inexperienced new employee. But, Bill treated me like an equal without reservation and I have always admired that about him. I had to remember that the couple times when I had to interact with the President of my university who was just the opposite. I quickly realized that I was in a very special place at Microsoft. I had the opportunity to be part of the beginning of a company that would make history and I also learned very quickly that sales would and could be fun.

Over the years, I would interact with Bill many times but I never forgot how we got started. Bill was a driven individual who worked more than anybody to fulfill his vision. Sometimes it was difficult to find a compromise but there was an attitude at Microsoft in those days that was based on an eagerness to admit failure, correct the course and learn every day. He is a fierce debater who does not allow any nonsense, but who can – if deserved – praise others for what they contributed. It was never personal for him.

At the university most of my colleagues who were on time contracts discussed tenure every day. Academics without a job are a sad group and the German academia life where most teaching position (except the full professor) are time contracts which is extremely tough. At Microsoft, I had an employment contract where I could be fired with six weeks’ notice. At Microsoft I never again thought about job security.

In those days at Microsoft we were on a mission to make the personal computer an essential tool for professionals and home users alike. We were the underdogs fighting against the over-confident industry leaders like IBM, Siemens, Nixdorf or DEC. We followed a vision of “A PC on every desk” and “Information at Your Fingertips” and executed on a blueprint set by Bill Gates, Steve Ballmer, Mike Maples and later Paul Maritz. Every day the focus was on driving forward, getting things done against all odds and being part of an amazing development that would change the world more than anything since the industrial revolution. Thinking about job security and if you kept your job was just not relevant — it was about achieving goals, passing by the next threshold and building a totally new market.

Bill was (and still is) an incredible leader who inspired the troops by vision, knowledge, thought leadership and not by authority or the fact that he was the CEO. And, in the late eighties we already had a secret weapon: email. Even though it was a very rudimentary text base system, it allowed us to communicate in seconds with anyone in the company. Bill and any other executive at Microsoft were only one email click away from you and even more important we were just one email click from them. Amazingly, the system was rarely abused by people sending irrelevant emails to the top execs, rather there was an untold code of conduct that was respected by everyone. However, it gave us speed in communication, adaption of new strategies or tactics and allowed for rich discussions.

For me, it all started with that first talk with Bill in Hannover. Because of his straightforward communication style and lack of pretense, Bill and I connected. Later, as I internalized our company mission, I learned that the best results can be achieved by setting goals, learning from mistakes, understanding your competitors and partners while executing on your objectives toward a shared vision. Bill and Melinda started the Bill and Melinda Gates Foundation with the same state of mind and their commitment and ferocity to helping others is an inspirational example for all of us. Bill is certainly not done at 65 and the world is considerably better off thanks to his many contributions to technology and society as a whole.