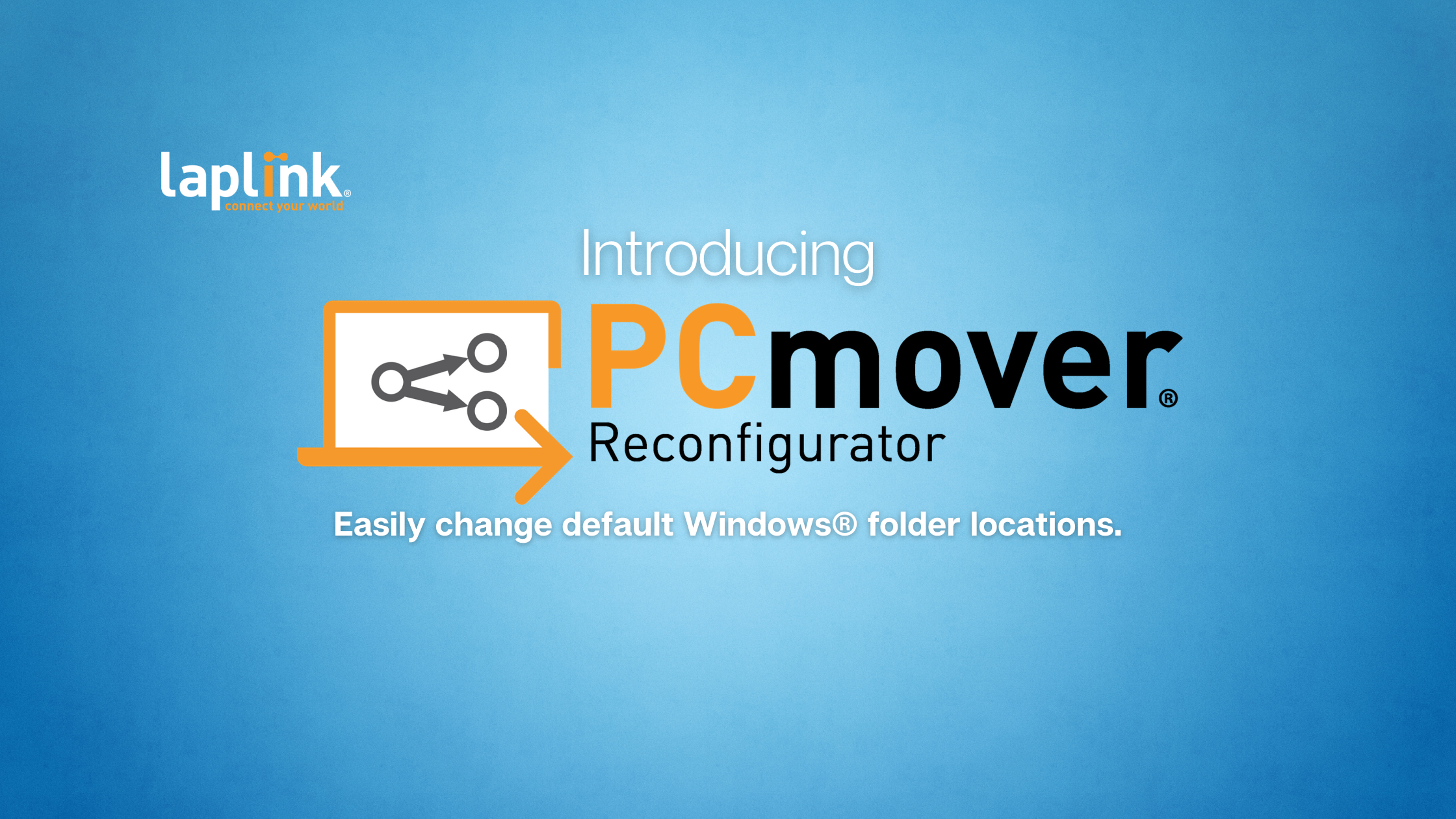 BELLEVUE, Wash., June 9, 2021 — Laplink® Software, Inc., the global leader in PC migration and creator of the only software of its kind recommended by Microsoft®, Intel® and all major PC manufacturers, today announced availability of PCmover Reconfigurator. This new tool, now available free of charge, simplifies the cumbersome process of changing default Windows® folders on a PC with multiple hard drives, such as a smaller solid-state drive (SSD) and larger secondary hard drive — a popular configuration for many Windows PCs.

Typically, users will often upgrade to a new PC with a multi-drive configuration that includes much faster SSD or NVMe (Non-Volatile Memory Express) storage while also retaining a secondary hard drive with greater storage capacity. While performance is significantly improved by having the operating system and programs load from the SSD, there is virtually no increased benefit to loading files, such as productivity documents, videos, or images, from an SSD. Instead, those files clog up a smaller capacity SSD and cause its performance to degrade over time due to space limitations.

For optimum performance, SSDs should be kept to less than 75% of capacity. Yet, figuring out how to change the Windows default file locations can be complicated and confusing, and involves digging around in properties and settings. As a result, most users with a multi-drive configuration will face the prospect of constantly cleaning up files to reclaim space on the SSD.

PCmover Reconfigurator simplifies the process of changing the default Windows folder locations on multiple drives with just a few clicks. Users simply install PCmover Reconfigurator, choose the Windows libraries they want to move to another drive, click the “TRANSFER” button, and the libraries, along with their contents, are transferred to their new location. Supported storage folders include Documents, Music, Pictures, Videos, and Downloads.

PCmover Reconfigurator is ideal when setting up and deploying PCs, and is the perfect companion when using PCmover Professional (for individuals), PCmover Business (for small business), and PCmover Enterprise (large organizations and IT service providers). PCmover is the industry’s leading solution for setting up a new PC, migrating user settings, files, and applications from an old PC to a new one. Plus, it is the only tool of its kind recommended by Microsoft®, Intel®, and all major OEMs. For large organizations with complex IT environments, PCmover Enterprise has been proven to save organizations significant time and money — more than $300 per PC, according to industry research.

For nearly 40 years, Laplink has been a global leader in consumer, SMB, and enterprise PC migration software, and has earned the loyalty and trust of millions of organizations and customers worldwide. The company’s PCmover software saves time and budget, reduces migration risks and increases efficiency. Only PCmover’s proprietary technology includes full selectivity that transfers data, applications, and settings from an old PC to a new one, even if the versions of Windows are different. The privately held company was founded in 1983 and is headquartered in Bellevue, Washington.

Neil is the Senior Director of Inside Sales & Marketing at Laplink. His sales and marketing expertise includes email marketing, lead nurturing, marketing automation, database marketing, user experience optimization, website optimization, testing, PPC (Pay Per Click), Google analytics and social media. Prior to joining Laplink, he was Account Director at Indigo Slate, Senior Account Manager at Oracle, and Dell Brand Manager and Digital Marketing Manager at Zones, Inc. Neil holds a Bachelor of Arts degree in Communications, Advertising and Business from Brigham Young University. Neil’s hobbies include playing golf and competitive volleyball. When he’s not busy spending time with his family, he’s fixing things around the house or cheering for the Seahawks.

Laplink announced today that PCmover has been selected by Microsoft as its recommended migration...
Read More

PCmover is the easiest way to move your PC. It takes the guesswork out of transferring data from an...
Read More