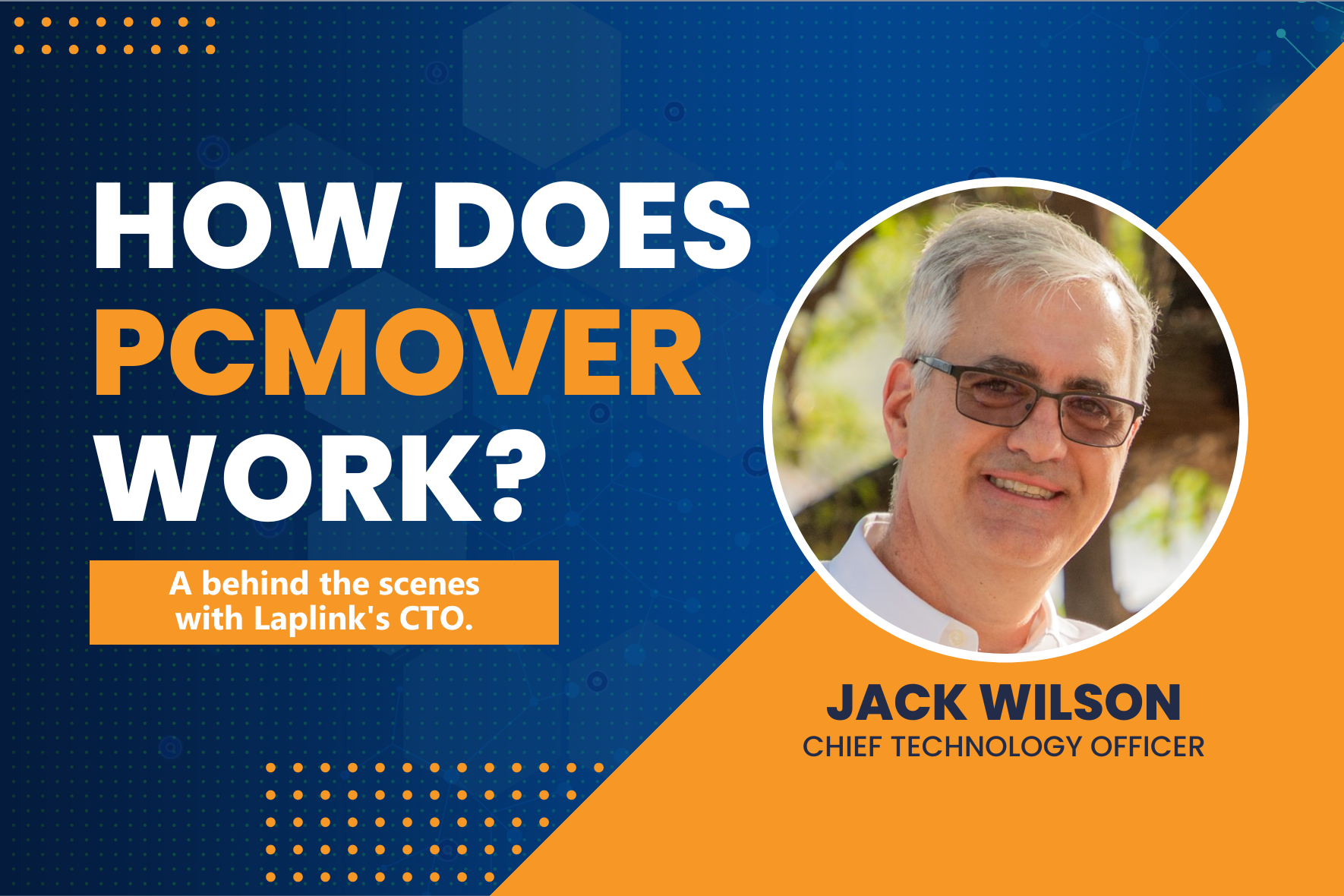 How does PCmover work? Laplink’s CTO, Jack Wilson, answers all your questions.

Wondering how PCmover transfers everything from one computer to another?  It may seem like magic, but it’s not! Let’s dive in to how it works.

PCmover is best known for its ability to transfer everything from an old computer to a new one, so by the time it’s done, your new computer looks and feels almost exactly like your old one, except it’s powered by faster, better hardware and possibly a newer version of Windows.

Isn’t a transfer just copying files from one computer to the other?

Unfortunately not. It’s easy to believe that a transfer is simply moving files, documents, pictures, and videos to a new machine. But a complete PC transfer is so much more complicated than that. Think about the many ways you use your PC. As a result, your PC contains thousands of files, often a hundred or more applications, and tens of thousands of settings, each of which needs to be moved to the right places on your new computer for them to work properly. You also may have one or more users on that computer, and each user will naturally expect their files, applications, and settings to be available to them just as they were on the old computer.

What if my old computer has an older version of Windows?

Yep, PCmover can handle that. One unique feature of PCmover is its ability to transfer everything EXCEPT the operating system. It doesn’t only move everything wholesale like many imaging programs do. PCmover gives you the power of selecting what to move, so moving from Windows 7 to Windows 11, or to and from any other combination of old and new Windows versions is not a problem.

Can’t I just use a cloud backup program to do a PC transfer?

Nope. If only it were that simple! Unfortunately, a cloud backup program like OneDrive or Dropbox is just for files. Meaning, it takes the files and stores them somewhere else, and then expects you to put them back to the same place when a restore happens. Sure, some backup programs are more elaborate and may handle some complex scenarios, but they don’t transfer your applications or settings. You’ll need PCmover to handle that.

How about imaging software?

Closer, but no cigar. In general, imaging software expects to make a “full” image or copy of the hard drive and then restores that image back onto a similar hard drive. It’s a bit like taking the body off one car and putting it onto another. If you transfer a Mustang body onto a Mustang chassis, you’ll be fine. But if you try to move that Mustang body onto a Chevy chassis, it’s not going to work. Why not? Most likely, if you make an image of your Windows 7 PC and try to put it onto your new Windows 11 PC, you’ll end up overwriting Windows 11 with Windows 7. Since your hardware is different, there is a good chance some hardware features won’t work.

What happens when I move an application?

Moving applications is probably the most important feature of PCmover. Again, you might think a PC transfer is just moving the files over, but it’s a lot more complicated than that. First, you need to determine exactly what files are a part of the application you wish to move. Sometimes applications put files in other places than C:\Program Files. Then you need to find all the settings. Settings may be in the registry or in data files in Program Data, or other places. Did I mention some of these folders are hidden? It can be a real hunt to locate everything! Lastly, there may be shortcuts that you have on your desktop that run the application. Depending on the user, drive configuration, and Windows version, where those settings are stored on your old PC may not be the exact places they’ll need to be stored on the new one. This is PCmover's special sauce. Other programs try to do what PCmover does and just can't get it right.

What is the registry and why should I care?

The Microsoft Computer Dictionary defines the Windows Registry as “a hierarchical database used to store information that is necessary to configure the system for one or more users, applications, and hardware devices.” This is fancy talk for: “it contains a lot of stuff vital to the proper running of your programs.” PCmover needs to determine which settings belong to what, and which ones to transfer to the Windows Registry on the new computer and in just the right place, or your applications may not run or your settings will be incorrect.

What about the user accounts? Do they move?

They sure do! However, this also can be complicated by what happens when the user sets up their new PC. On the old computer, they may be known as “Bob Jones” but on the new one they decide to be “Robert Jones”, or another name that differs from their previous PC. Fortunately, PCmover handles that, too. PCmover allows you to map one user to another user during a transfer and creates users it detects on the old computer that have not yet been set up on the new one. That also makes PCmover a great choice for users looking to move from an on-prem Active Directory to Azure AD.

What happens if an application exists on the new computer already?

No problem. PCmover can still transfer all the data, files, and settings from the old application to the new PC so the new application can find them and use them.

Are you deleting anything from my old computer?

Absolutely not! PCmover leaves your old computer just how you left it. However, if you want to recycle the old computer or give it to someone else, Laplink has a program called SafeErase that will quickly and securely delete browser data, files, partitions, and entire hard drives before you do.

What if I have multiple drives?

PCmover handles multiple drive transfers, too. If your old computer has two drives (say C: and D:), but the new computer has only one (C:), then PCmover will move the data from the D drive to a folder called C:\Drive_D on the new computer. In the other direction, PCmover can move the applications to the C: drive, but the rest of your data to another drive. If you want to change the default Windows folder locations, PCmover includes a technology called Laplink Reconfigurator for just that purpose.

What if my old computer isn’t working properly? Can I still do a transfer?

If the data on the hard drive is intact, you can still do a transfer. You can even remove the old hard drive, and with an added component, simply plug it into the new computer like a USB drive. It’s a pretty neat feature of PCmover, called Image and Drive Assistant. In fact, I may make that the subject of a future blog.

How do I connect my 2 computers? I don’t know much about networking.

PCmover does its best to make that painless for you as well. We can connect the two computers over Ethernet (wired), wireless internet, as well as via special Laplink USB cables. You can even use a Thunderbolt 4 cable for the fastest transfer speeds on the market! PCmover then automatically looks for and selects the fastest possible connection method. Here’s a breakdown of our cables.

What if I need help?

We have you covered there — 24/7. PCmover comes with Free 24/7 Transfer Assistance to provide around-the-clock support for anyone needing assistance at any point in the transfer process. Feel free to reach out anytime through live chat, Facebook messenger, Email, or giving us a call.

Does a PC transfer take a long time?

Transfer times are dependent on the method you choose to connect your two computers and how much data you need to transfer. Typical PC transfers can take up to a few hours. However, it’s a simple, set-it-and-forget-it experience. Once everything is configured, and the transfer starts, there’s no need to babysit it. You can go and do other things. While you do, PCmover will be hard at work with no need for any additional user input or interaction.

I see other programs that claim to do the same thing PCmover does. Do they?

Not really. We’ve taken in-depth reviews to evaluate programs that claim to do what PCmover does, and we have yet to find one that can hold up in comparison to the power of PCmover, especially when transferring applications.

What if I need to do more than one PC transfer?

PCmover comes in several versions that are built specifically to fit your needs. So whether you need to upgrade your personal laptop and move everything over with PCmover Professional, handle several migrations monthly as part of your business model with PCmover Business, or automate and streamline complex endpoint migrations at scale with PCmover Enterprise, we have you covered.

Tags: PCmover Enterprise, How To, PCmover, Q&A
Back to Blog 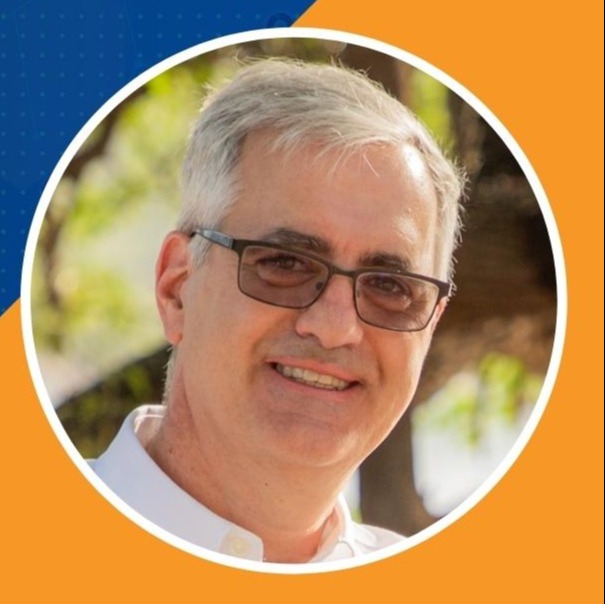 Jack joined Laplink in 1995 and has more than 27 years of experience in a wide variety of software development projects from radar and air defense systems to commercial software. He is a seasoned software developer and has had extensive experience developing network devices and network-enabled applications. Jack’s professional skills were honed at leading companies, including Networks Northwest Inc., Boeing Defense and Space Group, and Westinghouse. Previously, he earned a Bachelor of Science degree in Electrical Engineering from Pennsylvania State University. Jack is an avid electronics enthusiast and presently is a mentor for his local high school robotics team. He is also on the board of the Seattle-Sihanoukville Sister City Association. Jack previously served on the advisory board at...

Laplink’s Customer Service Center: Behind the Scenes with Arminda Ramirez