The PC market is clearly not what it used to be. Demographic changes and new form factors like Tablets and Phablets are distorting the numbers. Sales of PCs took a significant hit during the first quarter of 2015, according to new reports from Gartner and IDC, but the research firms say it’s not necessarily cause for concern. According to Gartner, sales worldwide sank by 5.2 percent year-over-year, while IDC reported that sales dropped by 6.7 percent year-over-year.

New PC shipments will remain moderate throughout the year, but in late 2015, the arrival of Windows 10 is expected to lead to a small increase.That’s in line with predictions from earlier this year made by both firms that PC sales would decline in 2015. Part of that has to do with heavy sales in 2014 as companies replaced computers running Windows XP with newer devices. The biggest drop came from desk-based PCs, but laptops and other portables continued to show promise. 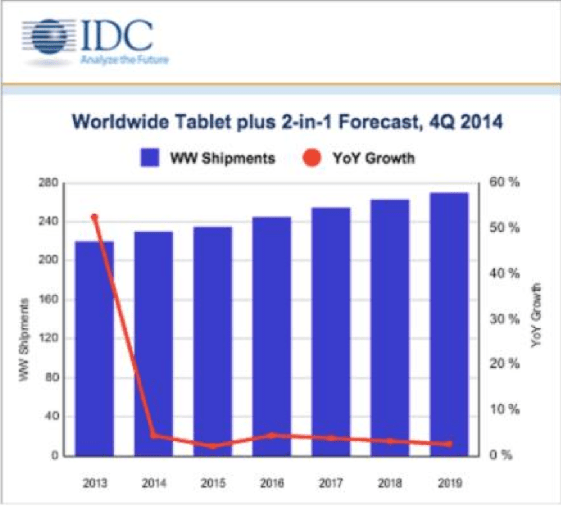 “More significant product refreshes from the likes of Intel® and Microsoft® (Windows 10) will be released later in the year, shifting OEM product updates and consumer interest toward later in 2015,” IDC says.

What about new Tablet Sales?

IDC published a new report that indicates that tablet makers will ship 234.5 million units in 2015, up only 2.1 percent from 2014. Though Android® is currently the leader in number of tablets shipped, IDC expects its market share to drop. Android shipment volumes will only grow marginally this year, from 154.7 million in 2014 to 158.1 million in 2015. But its expectations for 2019 are dismal. IDC predicts that Android will make 169.5 shipments in 2019, but its market share will drop to 62.9 percent from 67.3 percent in 2014.

However, iOS® tablets are the biggest losers according to these estimates. IDC thinks that iOS tablets will lose traction this year, with shipment volumes declining from 63.4 million to 60.1 million in 2015. In 2019, the corporation only expects Apple® to see 61.9 million tablet shipments. Furthermore, IDC says, Apple will see its market share atrophy from 27.6 percent in 2014 to 23 percent in 2019. The only company for whom this report is not totally bleak is Windows. The report says that shipments will actually grow from 11.6 million in 2014 to 16.3 million this year. By 2019, IDC says, Windows tablets will be shipping a volume of 38 million. It also sees Windows tablets claiming a larger share of the market in the years to come, from 5.1 percent in 2014 to 14 percent in 2019.

What does this mean for PC Migration?

While the overall market predictions are mostly cautious, new form factors (2 in 1 PCs etc.), new technology from Intel and others, and obviously Windows 10, are likely to increase the demand for PCs.

There is a need for a simple but comprehensive solution to help you:

PCmover is the ideal solution for PC migration. It is the only software to move all files, folders, settings, and applications to a new PC without overwriting or deleting anything.

This is written for our Deutsch readers.
Read More

It's Time to Buy a New PC