In 2014, Microsoft® ended technical support for its workhorse operating system, Windows® XP. This triggered a surge of migrations to Windows 7 and 8/8.1. Previously, many businesses had skipped migrating, because XP continued to work well. With the end of support, though, enterprise organizations needed to take the step.

Microsoft will release Windows 10 on July 29. For the enterprise customer, Windows 10’s under-the-hood improvements will allow enterprises to deploy and manage their PC’s more easily than in the past, as well.

The PC has continued to evolve into a more powerful machine. Today we have dozens of applications vital for our daily work, several gigabytes of data, and thousands of settings in the Windows registry. Reestablishing those on a new PC is time-consuming and near impossible to create as a streamlined system for a company.

Studies show that the foremost reason for not deploying an organization to new PCs is the anxiety of moving all of the user’s “stuff” from the old PC to the new one. PC deployments remain on the forefront of many IT department staffers’ minds, but the issue remains that there are few tools at the enterprise level to successfully complete this endeavor.

Organizations need a solution that will not interrupt employees’ productivity, will save time and resources, and will migrate the files, folders, and applications vital to each employee’s daily workflow.

Many times, IT departments utilize a centralized deployment utility like SCCM, LANDesk, or Altiris for upgrades and new PC deployments. One of the most challenging aspects associated with using these utilities is that they do not adequately address the transfer of user data, custom application settings, or even the transfer of the applications. This creates a very difficult situation for desktop support teams who are tasked with getting a deployed PC back up and running quickly.

An IT professional at one of the largest PC manufacturers communicated to me: “We are supporting thousands of large organizations to deploy their PCs. We do everything from logistics, imaging, tagging, and bringing the PC to the workplace. We do not, however, have a solution for the actual migration between two desktops.” This conversation brought to light the most common complaints from enterprises considering a migration:

The results of these shortcomings are increased costs to organizations, an extension of end-user downtime spent familiarizing themselves with the new system, a general feeling of user dissatisfaction, and prolonged project cycles that ultimately affect the bottom line for a company. 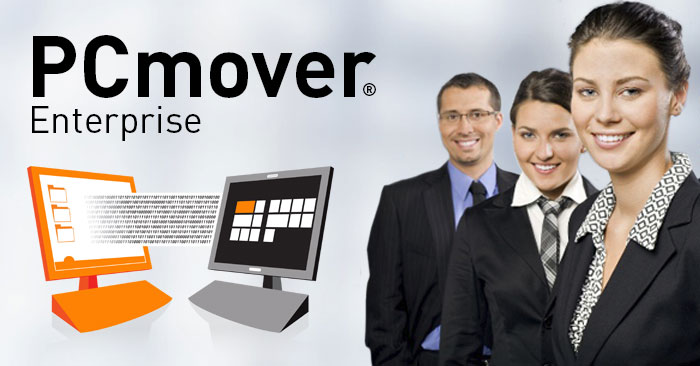 At Laplink, we developed PCmover® Enterprise to make the workstation migration process effective and cost-efficient. It automates the transfer of selected applications, data, and settings to a new PC. PCmover Enterprise is an OS-independent transfer tool that allows you to migrate to the newest version of Windows, including Windows 10. All of your migration scenarios are supported, and it has been proven successful in migration projects ranging from 100 to 100,000 PCs.

PCmover Enterprise has an easy-to-use wizard that does not require any developer knowledge and enables the IT Admin to set the rules. IT departments are able to predefine certain rules and policies within the organization to fit all cases. The Policy Manager allows IT administrators to pre-check a variety of choices within the program to create a predefined version of the product that can be executed by a user or an IT engineer with minimal interaction. The experienced user might require all options to be open to them, but most users in an organization are better off with a no-touch or light-touch solution to drive down user errors.

After migrating almost a hundred thousand PCs, we could not have asked for a better solution than PCmover Enterprise. -Windows 8 Global Deployment Consultant for Fortune 100 Company

PCmover transfers all selected applications, data, and settings to a new PC, including user accounts, applications’ environments, applications’ add-ons, background pictures, favorites, and more.administrators to pre-check a variety of choices within the program to create a predefined version of the product that can be executed by a user or an IT engineer with minimal interaction. The experienced user might require all options to be open to them, but most users in an organization are better off with a no-touch or light-touch solution to drive down user errors.

PCmover Enterprise by Laplink Software is the solution for every organization that has over 100 PCs. It will save a minimum of $300 per desktop deployed, eliminating the need for extended project cycles. Using PCmover helps organizations decrease unbudgeted costs during the projects, and dramatically decreases productivity loss.

No matter where you are in your deployments of new PCs or operating systems, PCmover will help make you’re the process streamlined, cost-effective, and efficient.

PCmover Professional as a Solution

Laplink’s PCmover software is the ideal solution for completing data transfers PC to PC, from a...
Read More

The clear choice for remote PC migration When it became apparent that remote work was the “new...
Read More

Setting up a new PC can be frustrating. In a recent survey, respondents confirmed that the...
Read More