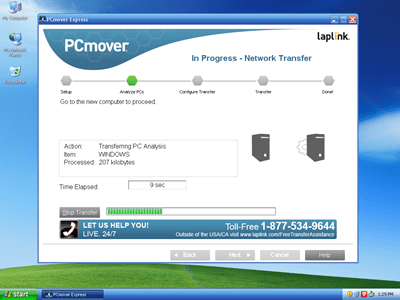 With end of Windows® XP support just around the corner, an exciting announcement was revealed on Microsoft’s blog today—Laplink® Software will be partnering with Microsoft to provide Windows XP users with a free tool, PCmover® Express for Windows XP, to help users move off of Windows XP quickly and easily.

“As the end of support for Windows XP on April 8 nears we’re continuing to focus on ensuring customers are aware of the deadline and helping them to migrate to a modern operating system such as Windows 8.1,” said Brandon LeBlanc, a Microsoft marketing communications manager, in the blog post today.

PCmover Express for Windows XP will copy files and settings from your Windows XP PC to a new PC running Windows 7, 8, or 8.1. Now, XP users won’t have to say goodbye to their music, family photos, videos, email, and even user profiles and personalized settings. PCmover Express transfers data across your home or work network, and allows XP users to customize exactly what to bring to the new PC and what to leave behind.

Windows XP users can download PCmover Express for free in English later this week from http://www.WindowsXP.com/. French, Italian, German, Spanish, and Japanese will be available later in March, with Korean, Chinese, Brazilian Portuguese, and Russian coming soon after that.

More updates will be coming soon! We’ll keep you posted.

Windows XP end-of-life is just around the corner, and recent extensions for Microsoft’s...
Read More

PC World is reporting some users attempting to upgrade to Windows 7 from Windows Vista are getting...
Read More